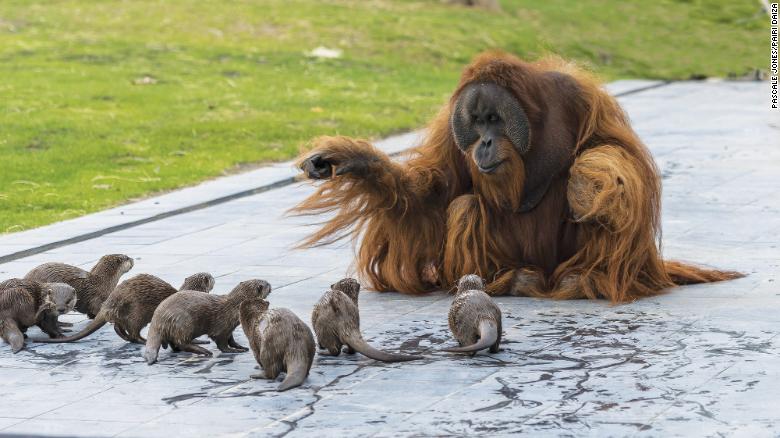 A zoo in Belgium has shared some amazing photos of a blossoming friendship between a family of orangutans and their otter neighbors.

The animals live together at Pairi Daiza zoo in Domaine du Cambron, as part of a program designed to maintain the primates’ wellbeing in captivity.
Read more and see more images… here 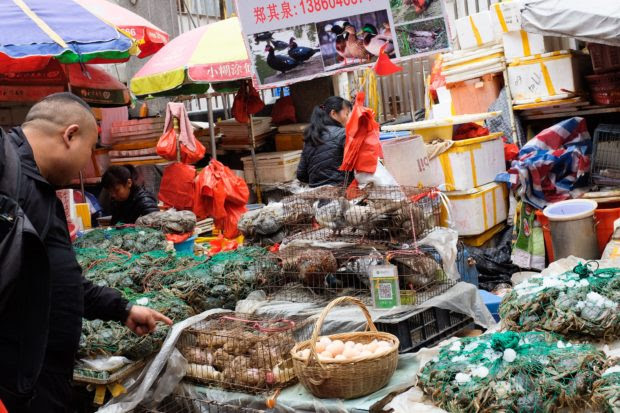 The nation’s most authoritative voice on infectious diseases today sounded a stern warning about the dangers of the wildlife trade and its relationship to pandemic diseases like COVID-19.

In an interview with Fox News, Dr. Anthony S. Fauci called for the global community to pressure China and other nations to close down their wildlife markets, where live animals are sold and slaughtered for food.

Fauci, the director of the National Institute of Allergy and Infectious Diseases and a member of the White House coronavirus task force, said: “It just boggles my mind that how when we have so many diseases that emanate out of that unusual human-animal interface that we don’t just shut [wildlife markets] down.”

“I don’t know what else has to happen to get us to appreciate that,” Dr. Fauci said. “I think there are certain countries in which this is very commonplace. I would like to see the rest of the world really lean with a lot of pressure on those countries that have that, because what we’re going through right now is a direct result of that.”

Read more at A Humane World

Happy Friday from Normand of the Save the Chimps in Florida, the world’s largest privately-funded chimpanzee sanctuary.

Excerpt from Save the ChimpsHappy Friday newsletter:

Hop onto Facebook for live videos from the sanctuary each weekday at 8:30 am and virtual field trips with Dr. Andrew Halloran each Wednesday at 9:30 am. The chimps have taken over Twitter so be sure to follow us there! And on Instagram you’ll find lots of happy and inspirational posts. Together, we will get through this and we are happy that our residents can brighten your days!

I  was born on January 6, 2000 at the Coulston Foundation laboratory, a now-defunct laboratory in Alamogordo, NM, to mother Ethyl and father Doug.

Although most chimpanzees born at the lab are taken from their mothers and raised by humans in the nursery, I was raised by my mom. Save the Chimps took over the Coulston Foundation in 2002, and rescued the 266 chimpanzees residing there. At that time, I was still riding my mother’s back as all infants do.

My mom was a beautiful and high-ranking female, and an excellent mother. She protected me, doted on me and loved me unconditionally. We made a nest together every night until the day she passed away from old age in 2009. Luckily, we were integral members of Bobby’s family by then and the group’s support lessened the loss for me.

I inherited my mom’s good looks and high rank. Over time I became the alpha male of Bobby’s family as Bobby stepped into the second-highest ranking position without argument. I am a typical teenager with a lot of bravado. I love to announce my presence with energetic displays and lots of noise. I am very smart and often discover new and inventive ways to use enrichment devices. Image and excerpt from A Humane World, Kitty Block, President of the HSUS blog:

Shenzhen has become the first city in mainland China to ban the consumption of dog and cat meat, marking one of the biggest wins yet in the global battle to end the dog meat trade.

This is China’s fifth-largest city. Although not itself a major center for dog and cat meat consumption, Shenzhen is located in the Guangdong province where the dog and cat meat trade is widespread. A ban here is a powerful affirmation of changing Chinese attitudes toward eating companion animals.

Dogs and cats are not in any way associated with the coronavirus pandemic. But officials in Shenzhen say they decided to include them in a proposed law banning the wildlife trade introduced in February in the wake of the pandemic because of the special status companion animals have in Chinese hearts and homes. Further to my earlier post about Takaya, the following is from the President of the Humane Society of the United States:

The killing last week of Takaya, the lone wolf of Canada’s Discovery Island whose story of survival and resilience captivated people around the globe, is a grim reminder of the uphill battle wolves face in the modern world.

This was a legendary young wolf, with a grit and instinct for survival that riveted conservationists. The unique life he carved for himself made him the subject of numerous documentaries and television shows, winning him fans the world over. He certainly did not deserve to die for the sake of some trophy hunter’s cheap thrill.

It is believed that Takaya ventured off on his own and away from his pack more than six years ago. While wolves rarely move out of their packs, we can only assume that the wolf–beset by the pressures that so many of his kind face today, including trophy hunting, government culls and habitat destruction—left to start a family of his own.

Takaya was first spotted travelling alone by members of the Songhees First Nation whose territory includes Discovery Island in British Columbia. He lived solo for many years, earning the sobriquet of the “lone wolf.” Earlier this year he ventured out once again, possibly on a search for food or a mate. He completed a dangerous swim across coastal waters to Victoria where he was eventually tranquilized by conservation officers, tagged and relocated to a remote area near Port Renfrew. It is there that the trophy hunter shot him.

Author: Vegan Richa, one of my favorite vegan food bloggers – Visit Richa’s website for an amazing collection of vegan recipes.

This grillable veggie burger can be made nut-free using sunflower seeds. I am making this recipe tonight with walnuts instead, adding wheat germ, nutritional yeast and liquid smoke, and omitting coriander and fennel seeds and green chile cause I have none on hand.
Pan fry, bake or grill and serve with BBQ Sauce and other fix-ins. Makes 6 to 7 patties.
Prep Time10 mins
Cook Time35 mins
Total Time45 mins
Calories: 269kcal

To make the patties gluten-free use gluten-free breadcrumbs and rice flour or chickpea flour.

To make the patties soy-free, use soy-free bbq sauce

For variation: Add zest of half a lemon with the lemon juice. Use ketchup + sriracha instead of bbq sauce.Add more smoked paprika for smokier onions.

BY GRACE THROUGH FAITH

Natural plant-based recipes, with a sprinkling of lifestyle tips!

Sweet and Lovely Life
Straight from the Horse's Heart

A Spiritual Ride through Love, Loss and Hope

Finding my way back out of motherhood -- while mothering

Women: Each One A Survivor

The only good cage is an empty cage